What happened next is a legend.

General Lee had been riding around the battle field all day, managing the battle as would a good commander. He couldn’t use his hands very well, since one wrist was sprained and one was broken due to a mishap with Traveler, his horse. He was witnessing what was happening to the Confederate right flank, when his aide said there are troops coming on the field to the south. Lee asked his aide to identify the troops. The aide looked through his binoculars.

Lee must have held his breath because he had used all his troops in the battle and had no reserve forces to stop the Union breakthrough. The aide said they were Major General A. P. Hill’s forces, which had force marched from Harpers Ferry. Hill’s boys hit the Union Battle line in their left flank and forced the Union forces back to their originally line of defense after they had crossed the Antietam Creek in the late morning.

This is where the Union forces could have won the battle and probably surrounded Lee’s Army of Northern Virginia. The third part of McClellan’s battle plan was to send the V Corps straight through the middle of the Confederate Line. There weren’t any Confederates to stop him. But he elected to stop all the hostilities and the chance was lost. 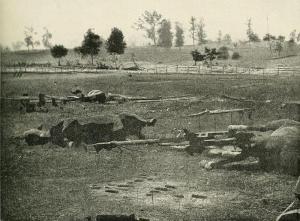 As Nancy and I walked and looked over this very rough terrain, I tried to imaging the cacophony of battle, the carnage of dead men and horses, the cries of the wounded and the shrieks of wounded horses. It must have completely overwhelmed the senses and dumbfounded the mind.

Vernon has been a Civil War buff since childhood, but had been inactive in Civil War history for over two decades. However, in the early 1990s his interest was rekindled after watching Ken Burns’ “Civil War Documentary” on PBS. He particularly became interested in the Battle of Antietam (Sharpsburg) and decided to learn more about this epic struggle.
View all posts by Civil War Reflections →
This entry was posted in Antietam, Civil War and tagged American Civil War, Battle of Antietam, Civil War Reflections: Honoring the Battles, George B. McClellan, Robert E. Lee. Bookmark the permalink.