All three of us wanted to have a gander at the dance participants. So we walked to the Dance Tent to see how the event was shaping up.

Well, the first observance we noted was the tent was way too small for the number of dancers. There was hardly enough room to maneuver on the dance floor. Second, it was hard to hear the band. And three, the dancers didn’t really care about what we thought. They were having a good ole time. The young ones were eyeing each other with romance in their hearts. After viewing the spectacle we decided to walk back to camp.

Walking back to the camp was easier said than done. Once we left the Sutler area, the night was so dark we could only see a few feet in front of us. The huge field we were walking through was about ankle deep in wet grass. So our brogans, socks and feet were soaked after we had traveled about 200 yards. 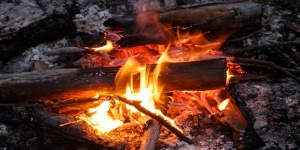 Glancing up occasionally, we could see our camp fires way in the distance, but we really had to focus on the ground in front of us so as not to misstep on the uneven terrain and twist an ankle. The unfortunate thing about getting old is loss of night vision. I was really straining to see where I was stepping. After a while, my eyes were so tired that I just started taking short steps and walked on the balls of my feet, using an old linebacker football stance I had learned in high school.

After what seemed like an eternity, we came to the post and rail fence on the gravel road that was going to act as the Emmitsburg Road the next day for the Pickett’s Charge scenario. We climbed the fence and walked on the road for about 60 yards and then angled off the road to the left and began to climb the hill toward our camp. There was a small ditch we had traversed going down the hill earlier on our sojourn to the Sutler’s that had been slightly muddy. It was now a full-fledged bog due to the rain shower. All three of us had to walk on some slippery wet wooden boards that acted as a bridge over the nasty ditch.

We finally got to the camp, and many of our compatriots were holding up blankets and clothing in front of the few campfires trying to get them dry. We checked our equipment. We had covered it so well that we didn’t have any wet gear at all.
We found Randy and asked, “What happened?”

Vernon has been a Civil War buff since childhood, but had been inactive in Civil War history for over two decades. However, in the early 1990s his interest was rekindled after watching Ken Burns’ “Civil War Documentary” on PBS. He particularly became interested in the Battle of Antietam (Sharpsburg) and decided to learn more about this epic struggle.
View all posts by Civil War Reflections →
This entry was posted in Civil War, Gettysburg, Re-enactment and tagged 150th anniversary, American Civil War, Civil War reenacting, gettysburg. Bookmark the permalink.