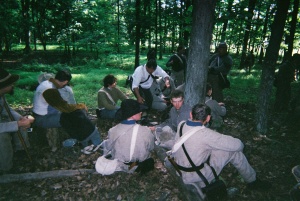 We marched down from the battle to our camp site, doused the fire pits with water, and covered them up with the dirt we had originally removed.

Then we marched about a mile to the tree line we were in the day before to wait for the Pickett’s Charge battle scenario. We Stacked Arms and then rested in the shade of the trees.

We had to keep a sharp look out for ticks crawling on us. I found two on me. One had gotten on my hand, and I got another on my forehead. Needless to say, I quickly deposited it in another part of the woods. I asked if anyone was having the same trouble. A few had the same creepy crawlies on them. One of my compatriots said he thought they were falling from the trees. I always thought they were in the grass.

Anyway our water wagon, drawn by two draft horses, arrived along with a van loaded with many bags of ice. We all replenished our fluid level and then had to “un-plenish” our fluid level in more remote portions of the woods. The ice was a welcome respite from the humidity and heat that was climbing into the 90’s.

We rested with many of us dozing. Some told jokes and reminisced about other reenactments. We all started eating anything we had left of the food we brought. I had one soft tortilla left, which I scarfed down. I still had some beef jerky, which I shared with my compatriots. They gave me some peanuts and a cheese stick.

About noon, the seven of us present from our car pool met and decided to have a plan for a rapid retreat to the cars. Hopefully, we could forego the usual traffic jam that occurs when trying to leave the re-enactors’ parking lot after a big event.

We would be portraying Kemper’s Virginia Brigade on the far right of the line. So each of us would charge the Yankee line; fall gloriously with Academy Award-winning flair; and then leave the field slowly as if wounded. We would all rendezvous at a barn behind the line, go to our cars together, and vacate the parking lot quickly. We all agreed it was a good plan.

About that time, Confederate troops started assembling in our area.

Vernon has been a Civil War buff since childhood, but had been inactive in Civil War history for over two decades. However, in the early 1990s his interest was rekindled after watching Ken Burns’ “Civil War Documentary” on PBS. He particularly became interested in the Battle of Antietam (Sharpsburg) and decided to learn more about this epic struggle.
View all posts by Civil War Reflections →
This entry was posted in Civil War, Gettysburg, Re-enactment and tagged 150th anniversary, 3rd Arkansas, American Civil War, Civil War reenacting, gettysburg. Bookmark the permalink.