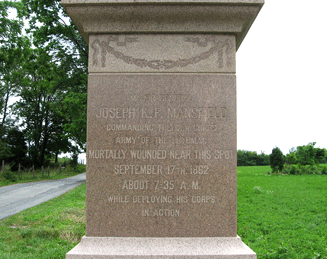 Gen. Joseph Mansfield historic marker at AntietamGen. Mansfield was removed toward the backside of the East Woods beside the Smoketown Road. He was propped up against a tree there and abandoned while his unit engaged the Confederate units at the edge of the East Woods. Ultimately, he was put in an ambulance and taken eastward on the Smoketown Road to the George Line Farm about a mile away. He died there the next day from the gunshot wound to his chest.

Gen. Mansfield’s eyes were closed as I described him to Spirit Guide. She asked me to talk to him. I was in awe of the man. Except for Colonel Strong, I had never talked to a ranking officer, let alone a two star general.

I said his name and he opened his eyes. He seemed disoriented. I asked him how he got wounded. He blurted out that he made a mistake and gotten wounded. He said he felt foolish. I related this to Spirit Guide, and she asked if there was any way I could comfort him. My Animal Spirit Guide went to him. She licked his face and laid her head on his chest. I felt so overcome with sorrow for him that tears came to my eyes.

He then asked if I were an angel. I told him no, but that I was there to let him know I would relate his story in any of my writings about the Battle. I assured him that he had done his best for his men and his country.

Spirit Guide asked me if the General was ready to leave this plane and I said I thought so. She said that I would know the words to release him and allow him to feel it was okay to move on.

Tearfully I told him he shouldn’t feel bad. Although the fortunes of war hadn’t gone well for him that day, he had gotten his division into the battle, and they were fighting very well. When he was hit, he was at the front of his men. He had no reason to feel foolish, and a grateful country bestowed its thanks on him.

I then told him the war was long since over and his family and friends were waiting for him on The Other Side. I asked him if he was ready to meet them.

Vernon has been a Civil War buff since childhood, but had been inactive in Civil War history for over two decades. However, in the early 1990s his interest was rekindled after watching Ken Burns’ “Civil War Documentary” on PBS. He particularly became interested in the Battle of Antietam (Sharpsburg) and decided to learn more about this epic struggle.
View all posts by Civil War Reflections →
This entry was posted in Antietam, Civil War, Spirits and tagged Battle of Antietam, civil war, Major General Joseph Mansfield, Soldiers and Spirits. Bookmark the permalink.