I told Jack that his immediate family – the ones he really missed – was waiting on him. I also told him the war had been over for many years. I stated that he could join them if he wished.

I told him all he had to do was touch my Symbol. He did, and he was gone.

I got back on ASG 2, and along with ASG 1, we were abruptly in front of the East Woods. I asked them if we could go to Shiloh next. They didn’t give me a disagreeable glance. So I figured we would go to Tennessee next.

I said goodbye to them.

They both went into the East Woods and disappeared amongst the trees.

I need to explain a few things.  I really never have been a psychic person.  I can remember during Basic Training back in the 1960’s that I would get a premonition of something that was going to happen, and it would. However, it only happened a few times. 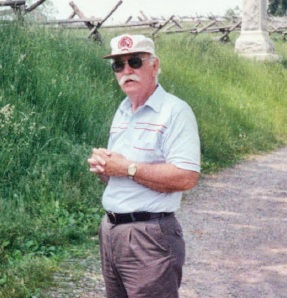 I did come close to being killed in Viet Nam, but I got out of the situation without being hurt. However, that experience did change me in that I woke up to the spiritual nature of this world.

But the big change for me started when Walter Smith, my mentor, died in front of the Visitor’s Center at Antietam Battlefield just before he was to give a lecture.

Somehow his death plugged me into a spiritual plane…just like plugging a lamp into an electric socket.  Then my Spirit Guide flipped the switch and turned on the lamp.

The journeys to The Other Side are very amazing to me. They are wonderful and daunting.  All I can say is that I learn more each time I go there. I hope they help you as much as they have enlightened me.

Vernon has been a Civil War buff since childhood, but had been inactive in Civil War history for over two decades. However, in the early 1990s his interest was rekindled after watching Ken Burns’ “Civil War Documentary” on PBS. He particularly became interested in the Battle of Antietam (Sharpsburg) and decided to learn more about this epic struggle.
View all posts by Civil War Reflections →
This entry was posted in Antietam, Civil War, Spirits and tagged Battle of Antietam, civil war, Soldiers and Spirits, vernon dutton, Walter Smith. Bookmark the permalink.