I just stayed in a kneeling position for a few minutes and tried to think about my situation.

I said earlier that I didn’t get into this predicament due to a time machine. However, that circle with the rotating ring had to have been some kind of machine.

I don’t know if it was alien made, but here’s what I do know.  It didn’t cause me pain during the time travel. There wasn’t a bunch of blue viscous material that you had to walk through to be transported. It didn’t cause a lightning storm when I arrived, and there wasn’t a long tunnel that I traveled down to get here.

The scariest part of the whole operation was seeing myself pass on the other side of the circle.  What does that mean?

I contemplated all of this and finally asked the big question, “Can I go back?”

First, I had to find out today’s date and time.

Speaking of time, I looked at my wristwatch.  It had stopped. I looked at my wedding ring, and it was still on my finger.  I felt in the left front pocket of my jeans for the dollars that I normally carry. They were there. I pulled them out, and in the moonlight I could see the numbers on the bills were the same. I counted two $20 dollar bills, one $5 dollar bill and three $1 dollar bills, but in the dim moonlight the writing on the bills looked different.  I couldn’t make it out. I put the bills back in my pocket.

If I turned left and followed the Hagerstown Pike south, I knew Sharpsburg was one or two miles down the road. Besides the Piper Farm, which I would pass on my left in about half a mile, there wasn’t another dwelling on the road, and the Piper farm was back off the road a quarter of a mile.  So, hopefully there were no dogs on the route.

I got to my feet and felt cold again. I put my cold hands in my pockets, hunched my shoulders and looked toward Sharpsburg. Thankfully, no wind was blowing.  I trudged off hoping that dawn would break soon. 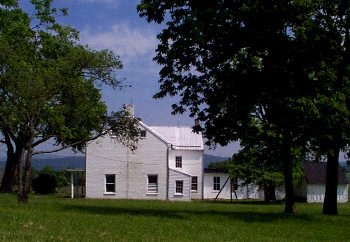 Vernon has been a Civil War buff since childhood, but had been inactive in Civil War history for over two decades. However, in the early 1990s his interest was rekindled after watching Ken Burns’ “Civil War Documentary” on PBS. He particularly became interested in the Battle of Antietam (Sharpsburg) and decided to learn more about this epic struggle.
View all posts by Civil War Reflections →
This entry was posted in Civil War, Maryland, Time Travel and tagged civil war, Maryland, time travel. Bookmark the permalink.