I was standing to the man’s left side. He looked at me and said, “Who are you?”

“The devil incarnate!” I yelled.

Then I slugged him with a right cross that, in his inebriated state, laid him out cold.  A pain suddenly shot through my right hand. I moved my fingers.  They were mobile, but it hurt like the dickens. 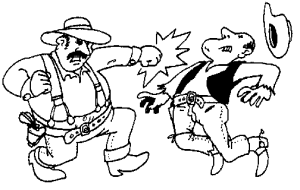 I looked down at the wrapped wound on my arm. The makeshift bandage was held in place by some coagulated blood. I would worry about that later.

One crisis at a time.

The sky was growing lighter. I wanted to get across the Potomac River before dawn, if I could. So I began to put on the 19th century trappings.

First came the shirt. With my t-shirt as a buffer, the shirt’s grime only accosted my arms. Next came the trousers. The prior owner probably outweighed me by a good 50 pounds, but he was shorter. So, once I pulled the bracer straps up on my shoulders, the trousers hung loosely on me, but they didn’t drag the ground. However, I could feel the dirty, course wool rubbing against my legs, and I knew they would soon chafe my legs badly if I didn’t get some type of long underwear for a cushion.  Lastly, I stuffed my feet in the man’s brogans, which were about a half size too small. Needless to say, they were uncomfortable.

I stood up and let out a breath I didn’t know I had. Once I inhaled, I retched. The combination of the time travel situation, the dog attack, and my purloining of the traveler’s filthy clothes brought on a nausea that hit me suddenly.

What was going to happen to me?

That question brought me to realize that I was in a very precarious situation. I stopped moving for a few seconds and thought about all the worst case scenarios.

I knew I had to get control of myself and let go of these thoughts.  I closed my eyes, went into a Wu Ji stance, completely relaxed my body, and took a few deep breaths.

Suddenly, the thought hit me, “Keep to your plan.”

I turned and walked down the hill toward the Potomac River.

Vernon has been a Civil War buff since childhood, but had been inactive in Civil War history for over two decades. However, in the early 1990s his interest was rekindled after watching Ken Burns’ “Civil War Documentary” on PBS. He particularly became interested in the Battle of Antietam (Sharpsburg) and decided to learn more about this epic struggle.
View all posts by Civil War Reflections →
This entry was posted in Civil War, Time Travel, War Stories and tagged civil war, Potomac River, time travel. Bookmark the permalink.