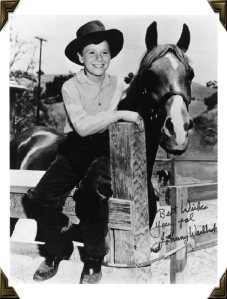 Autographed photo of Johnny Washbrook with Flicka. Image via myfriendflicka.com

Ole Beau and I got further acquainted with each other as the day went along.

We stopped by a stream after about what seemed like 3 hours. I took Beau down to the stream, and he slurped the clear water willingly. I didn’t let him have too much. I learned that from the Saturday morning “Flicka” TV shows I watched when I was a kid.

I sat down by the stream and ate a portion of the victuals Hattie had prepared for me.  After a while, we got back on the road.

We didn’t seem to pass a lot of wagons on the road, but there were a few riders who passed us heading north. They didn’t seem to be in a hurry, so I stopped to talk to one older gentleman. I asked him if he had heard anything about a Yankee army being in the area.

He said, “No, but there was one that had come out of Washington City and had moved into northern Virginia, all the way to just north of Fredericksburg.”

He continued to tell me how General Johnston had maneuvered his army southward from Manassas all the way, delaying the Yanks without having to put up a fight. Johnston would have to fight now to keep Fredericksburg from falling into enemy hands.

It seems some things never change, no matter what universe to which you are assigned. Joe Johnston would rather back up than move forward in any realm.

I asked about Stonewall Jackson’s Army of the Valley.

The man just looked at me quizzically and said, “If you mean General Thomas Jackson, he is probably going to reinforce Johnston again. They stopped a Yankee move like this back in 1861.”

I asked the name of the Commanding Yankee General that was leading the advance and the gentleman said, “Well, it’s Hancock, of course.”

My lower jaw dropped, and I must have seemed like a dunce to the traveler. I apologized and explained I had just gotten here from Texas and was trying to catch up on all the news.  That appeared to satisfy him. We exchanged some pleasantries and parted ways.

After what felt like 20 hours – but must have been just five – of Beau’s walking, trotting and galloping, we arrived in Halltown.

The sun was low in the sky, and I decided to stop for the night to rest my aching back. The first order of business was to find a livery stable for Beau.

Vernon has been a Civil War buff since childhood, but had been inactive in Civil War history for over two decades. However, in the early 1990s his interest was rekindled after watching Ken Burns’ “Civil War Documentary” on PBS. He particularly became interested in the Battle of Antietam (Sharpsburg) and decided to learn more about this epic struggle.
View all posts by Civil War Reflections →
This entry was posted in Civil War, Time Travel and tagged civil war, Fredericksburg, Gen. Stonewall Jackson, Parallel Universes, time travel. Bookmark the permalink.