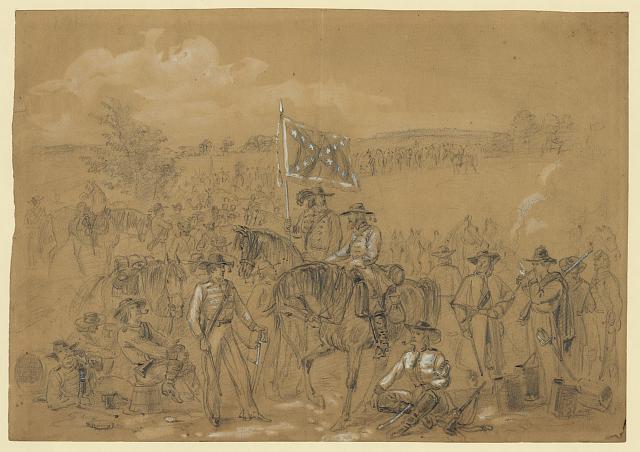 The Neuse River’s wide mouth is at the southern end of Pamlico Sound.

The Union buildup was finally completed by the end of May, 1862. McClellan had over 90,000 troops, 100 cannon, and 2000 cavalry. Still he stalled and wanted more. Lincoln stated there were no more troops to send without stripping the army protecting Washington City from the twin threats of Confederate Generals Joe Johnston and Thomas Jackson.

Finally, McClellan began a crossing of the Neuse River on June 18, 1862. He had badly used his cavalry as a scouting force and didn’t know that the Confederates were ready for him.  The few Union scouts that got a quick view of the Confederate position reported the Rebs had retreated.

Confederate artillery cut the advancing Union brigades to pieces. A large Confederate Infantry Blocking force was in the breastworks, while a Confederate Division attacked each of the Union flanks.

It was a disaster for McClellan.

The Union Army gave way with many regiments routed. However, enough Union units gave ground grudgingly to allow the Union Army to retreat back to New Bern without being decimated.

Vernon has been a Civil War buff since childhood, but had been inactive in Civil War history for over two decades. However, in the early 1990s his interest was rekindled after watching Ken Burns’ “Civil War Documentary” on PBS. He particularly became interested in the Battle of Antietam (Sharpsburg) and decided to learn more about this epic struggle.
View all posts by Civil War Reflections →
This entry was posted in Civil War, Time Travel and tagged civil war, Gen. George B McClellan, Gen. Robert E Lee, Kinston NC, time travel. Bookmark the permalink.