I got down off Sampson, retrieved the lady’s reins and handed them to her. She smiled graciously and took the reins from me. I had a chance to observe her wardrobe and what she had been riding.

She was riding side saddle, which was the only respectable mode of horseback riding allowed a lady in the 19th century. She was wearing a blue frilly blouse that had white lace that acted as a collar around her throat. The blouse was the same light blue that matched her hat. Her riding skirt was a darker blue and reached the top of her black boots. Her hands were covered in white gloves with lace around the wrists.  She had a brown riding crop that was hooked around her left wrist. Her horse was a dappled grey mare that was still breathing hard from its exertions.  I took time to rub her horse’s forehead and nose and speak slowly to it. After a few rubs, the laid back ears of fright were replaced with a sense of calm.

I looked at the lady and said, “Your horse is okay to travel now.”

She looked at me with a solemn expression and declared, “Again, I must thank you for your endeavors on my behalf.”

She then smiled broadly, extended her hand and said “Lula Bell and I thank you for your gallantry.”

I accepted her hand in both of mine and stammered, “It was my pleasure.”

I hoped that I wasn’t being too forward, but she didn’t act offended. So I guess what I said was respectful. I realized I had held her hand too long because she sort of tilted her head and looked at me with an inquiring expression. I quickly let go of her hand and uttered, “I don’t even know your name.”

She voiced a delightful little peel of laughter and answered, “I am Daphne Jane Newcomer, and may I ask who is addressing me?”

I smiled from ear to ear and found myself responding, “James Edward Hager, at your service.”

She said, “Well James Edward Hager, we need to be on our way. I have a lot of things to arrange for our dinner.”

She then looked at Captain Mosby, extended her hand and exclaimed, “We meet again, Captain. Your quick action has saved our city and me, personally. We owe you a great debt of gratitude.” 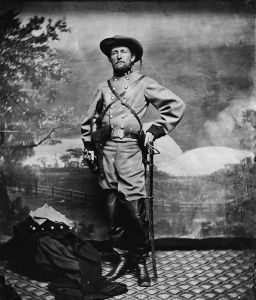 He rode his horse close to Ms. Newcomer, accepted her hand in his right hand, and bowed from the waist while removing his hat with his left hand. It was a sheer act of chivalry and nicely done.

It also caused more than a tinge of jealousy to rear its ugly head in my heart.

I might have a rival for Ms. Newcomer’s affections.

Vernon has been a Civil War buff since childhood, but had been inactive in Civil War history for over two decades. However, in the early 1990s his interest was rekindled after watching Ken Burns’ “Civil War Documentary” on PBS. He particularly became interested in the Battle of Antietam (Sharpsburg) and decided to learn more about this epic struggle.
View all posts by Civil War Reflections →
This entry was posted in Time Travel and tagged Capt. Mosby, civil war, Daphne Jane Newcomer, fiction, James Edward Hager, time travel. Bookmark the permalink.