Ahab took me to a table in the back yard on which sat a large, white ceramic bowl and accompanying pitcher, which I reasoned was full of water. I also spied a bar of soap, along with a hand towel.

I asked if there was a bathroom in the vicinity. Ahab tilted his head and looked at me in the most uncomprehending way.  I reiterated that I meant “was there an outhouse on the property?” 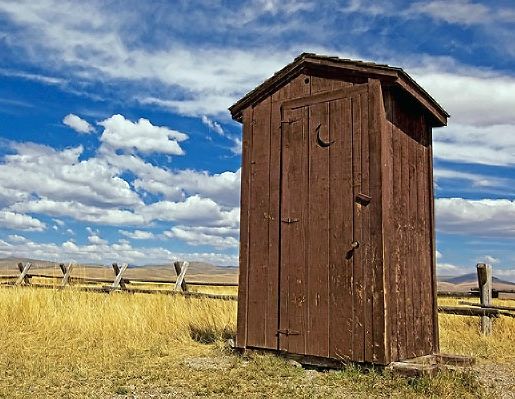 He grinned and gestured to a small building about 70 feet farther back on the property. I smiled and said I would rather utilize these facilities before I washed up.  He again smiled with all the patience of Job and bowed. I knew he must have thought “here is another of these visiting idiot people that aren’t from around here with all their weird ways.”

Anyhow, I proceeded to the outhouse, extricated my proverbial newspaper, did my business, and returned to the table to wash up.  Ahab watched me closely on my round trip journey without a sign of embarrassment. I believe he was the self-appointed guardian of the Newcomer family, and he had decided that I needed to be meticulously watched.

I removed my coat and rolled up my sleeves to wash my hands and forearms. It was then, for the first time, I really got a whiff of how bad I smelled.  So, after washing up and running my fingers through my hair, I flapped my coat about five times to get the sweaty odor out as much as possible. Abruptly, Ahab handed me a small bottle with a stopper. I accepted the proffered container and uncorked the top. I took a sniff and smelled the distinct scent of lilacs. I profusely thanked Ahab and dabbed the stopper numerous times under my armpits, once on my chest and a few time on the seat of my trousers. This must have been another faux pas in Ahab’s eyes, because he raised both his eyebrows to their full height.

I grinned at him and, donning my coat, asked, “Shall we return to the big house?”

I smiled and said, “No need to call me that. I am just Jim.”

Ahab looked embarrassed and didn’t reply. He just extended his arm toward the mansion indicating he wanted me to precede him.  I guessed he didn’t want this weird white man to at his back. I might infect him with a disease or attack him.