I awoke the next morning refreshed and hungry.

After eating Hattie’s wonderful breakfast, I went down to the bank to get the names of the students at my school from Mr. Throckmorton. I also handed him the Widow Throckmorton’s letter.

As I turned to leave, he asked me to stay until he had read the letter. It was a long missive. He took his time absorbing it.

Once he finished, he got up and walked around his desk. He clasped my hand and shook it.

Choking back tears, he looked me full in the face and proclaimed, “You have rendered our family a great service. We will be forever grateful to you. Is there anything I can do for you at the present time?”

I responded, “Yes, please tell me about these families that might have children attending the school.”

“Oh, they will have the children attend alright,” he said. “I will see to that.”

The information on each family was invaluable.

During the next week, I visited each family and child…again, I use the word “child” loosely. Although I knew Mr. Throckmorton put in a good word for me, I wanted the parents (and hopefully the children) to want to attend without it being an obligation to the local banker. 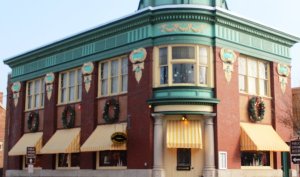 I asked each mother and father what they expected for their child to learn at the school. Some of them didn’t have a clue. Others just wanted them to be “eddicated”. A few wanted their offspring to have enough smarts to take over their businesses.

I also asked each child what they wanted and got mostly shrugs. I then laid out my curriculum for the coming school year. The things I was going to teach raised the eyebrows of many parents, but they all said it sounded good to them.

By the time I got around to everybody’s house, the exploits down in Harpers Ferry had made the rounds in Shepherdstown. I had saved the last visit for the Sage family. I knew the two boys were the ones who had run off the last teacher.

I sat at the dinner table with Mr. Sage and the two boys, Jeremy and Jonah.

After our visit about the school curriculum, Jonah piped in, “I understand you killed Jones Gill. Is that so?”

I looked the young hooligan square in the face, pulled back my coat to reveal my two Colts, and staring him straight in the eyes decreed, “Yes, I killed him and his brother. I can’t abide bullies.”

The youth’s eyes widened. He sat back against his chair with a submissive look on his face.