The meeting finally ended, and I stayed on the podium hoping everyone would leave and I wouldn’t have to talk with anyone. No such luck. Daphne approached the dais and motioned to me to come forward to talk with her. She stopped on the main floor level, and I knelt down so we could speak with some semblance of privacy.

“Please come to Ferry Hill as soon as you can. I will be waiting on you, no matter how late it is,” she whispered.

I nodded my assurance. She turned and went to join the Douglas family at the entrance to the church.

Just then, Mr. Sage along with Jonah, and Jeremy Sage came forward to shake my hand. When Mr. Sage saw the different way that his boys and I shook hands, he raised an eyebrow, but said nothing. Most of the congregation left, but a few of the townsfolk came forward to thank me for all the falderal that I had been a part of. I just uttered that I was glad to help.

I nodded my acceptance and then made one proviso. “It will have to be after school is out.” Major Mosby said that a late afternoon meeting was okay with his schedule.

Mr. Throckmorton added, “Well, why don’t we meet at the bank at six o’clock?” We nodded our agreement with his suggestion.

I looked at Major Mosby and queried, “Mind if I accompany you to your camp?” He nodded in the affirmative, and we walked out and mounted our horses. I was still riding Hattie’s mare. I waited until we had cleared the town and were out of sight of any inhabitants, then I turned to Mosby and asked, “Why did you make up such a story about me?” 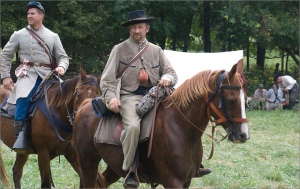 Mosby looked at me and said, “Two reasons. One, Throckmorton was rather dubious of your story of how you got here and checked with some of his acquaintances in Baltimore about your teaching there. He had come to me with the information that I confronted you with about no one knowing of any teacher named Jim Hager. So it alleviated his doubts about you when I revealed, and I use that term lightly, that you worked for me. Second, it gives the townsfolk someone to look up to in times of trouble when the cavalry can’t be here.”

At this point I added, “And it makes me the main target of any of the opposition.”

Mosby grinned and quipped, “I guess you are right on that score. But wouldn’t you rather that you were the target than one of the townsfolk?”

I gave him a rather questionable look and answered, “Not necessarily.”

His smile widened and he jested, “That’s what you get for not having a good story of how you got here.” I just gave him a sharp look that caused him to chuckle.

Mosby warned, “Well, be careful. We will have pickets out tonight on the Virginia side of the bridge. The password is “Shenandoah.” There may be Yanks roaming on the other side of the Potomac. I would suggest you not go, but I know the fires of young love burn bright.”

I gave him a half-hearted salute and headed to the covered bridge over the Potomac.