Everyone in our two companies became very apprehensive when they could see the Yank column approach Gapland. Hands went over the noses of horses to keep them quiet.

I had already walked to the front of Captain Greenley’s company with Stonewall.  All I needed to do was wait on Major Mosby to start his diversion. Then we could head out.

The Yank column finally entered Gapland, and we could hear some of the citizens cheer as they marched through the town.  The Yank flankers on our side of Gapland stayed on the eastern edge of town, but were still proceeding without scouts.

However, once the forward infantry regiment got to the south of Gapland, the Yank cavalry sent out advance scouts just like Major Mosby predicted.  The scouts fanned out like an umbrella in front of the column and moved leisurely south. The rest of the cavalry stayed next to the main column as it advanced through the town.

I looked to the north and saw two more Yankee infantry regiments in the caravan, with the artillery train in the distance and the supply wagons following them.

Time seemed to stand still. My heart was already racing. I just wanted this show to get on the road.  The slow pace of the Yank column was driving me crazy.

I turned to look at Captain Greenley. He was sweating profusely and was as jittery as I was.  I caught his eye and shook my head and smiled.  He caught my meaning and grinned. I think the silent exchange released a lot of tension we both were experiencing. I felt as if a gorilla got off my back.  I actually stood up straight. I didn’t realize that I had been bent over while watching through the thick foliage.

It took about another forty five minutes for the third Yank Infantry regiment to get half way into the town.

All of a sudden we heard firing to the south and realized that our southern force under Captain Edwards had made contact with the head of the Yank column.

I turned to Captain Greenley and said, “Let’s mount.” 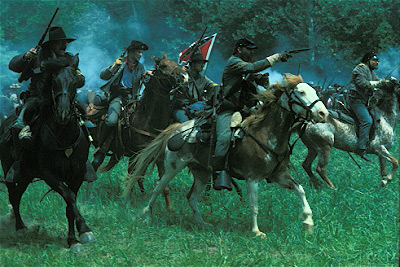 We climbed on our horses and the men behind us began to do the same. I took a quick look behind me. All the men had mounted and drawn their carbines.

Suddenly, we heard the Rebel Yell raised from Mosby’s contingent as they assaulted the eastern flank of the Yank column.

I pulled my pistol and yelled, “Forward!”

I didn’t have to kick Stonewall. He took off like a scared jack rabbit. His ears were laid back, and he was in full stride in no time.