We loped out of Burkittsville and headed north on the Burkittsville Road.  Slowing down after about half a mile to give the horses a breather, we passed a white-washed church on the left side of the road.  I turned to Zeke and asked, “What’ll we encounter in the next 2 miles?”

“Just scattered farmsteads and a few groups of houses,” he replied.

I nodded and asked, “Any watering holes along tha way?”

“We can get water at most any farm house. Each one probably has a well. I just don’t know how welcome we will be,” he answered.

I nodded and said, “Let’s ride, and at the next large farm spread we see, we’ll water the horses.”

Stonewall added a snort for emphasis.

We loped the horses for a good three miles before we came to a rather large two-story brick house alongside the road. We brought the horses to a walk and entered the yard in front of the house.  A man dressed in a well-tailored suit came out on the front porch as we brought our cayuses to a halt at the base of the front steps. We all tipped our hats at the gentlemen, who nodded his bare head in answer to our greeting. 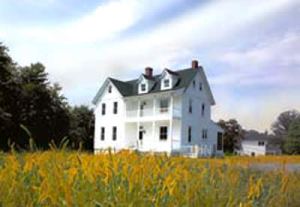 In a genteel voice I ventured, “May we water our horses at yar well?”

He looked us up and down before he said, “Who’s command are ya assigned to?”

“Oh, we have been granted leave and are going home for a few days. We are with the Virginia cavalry,” I added, hoping this would allay any fears of a Confederate excursion in force to the area.

The gentlemen mulled over my information for a moment and, then said, “Y’all can water y’all’s horses at our well in back of tha house.”

I answered, “Much obliged.”

We directed our horses to go around the large edifice and toward the well in the back.  As we cleared the side of the house, I saw a Yank dart back into their barn, which was sixty yards from the back of the house.

I immediately nudged Stonewall, put his reins in my teeth, pulled my colts from my belt and bent low in the saddle. It caught Zeke and Skeeter by surprise as we shot forward.  I didn’t utter a sound because I didn’t know how many Yanks were congregated in the barn. I entered the dark barn at a gallop. The Yank’s back was toward us and he was just giving the alarm, when Stonewall’s shoulder hit him a glancing blow. He went flying. The other four Yanks were in the process of pulling their pistols when I fired my two colts simultaneously into their midst. One of the Yanks fell to the floor of the barn. One Yank’s pistol never cleared his holster so he raised his hands in surrender. Two of them took off toward the backdoor of the barn. Zeke and Skeeter suddenly appeared at the other end of the barn with pistols raised at the runaway Yanks. They decided discretion was the better part of valor by dropping their pistols and raising their hands.

I ordered Zeke and Skeeter,”Bring y’all’s captives to me.”

They nodded and herded their prisoners forward.

I looked at the Yank nearest to me and ordered, “Pull out yar pistol with yar left hand and drop it to tha ground.”

He acquiesced and his Colt hit the dust.  I dismounted and walked toward him.

When he did, I picked up his weapon

When Zeke and Skeeter had joined me, I ordered, “Get all tha weapons and cover these three men.”

They responded as I had ordered.

I quickly jammed my colts back in my belt and examined the man I had shot. He had taken two slugs in the chest and was quite dead. I went to Stonewall’s victim and saw immediately that he was dead. His head was cocked at an angle that signified a broken neck. He was lying near a post that held up the straw loft. Apparently he had been thrown into the post when Stonewall rammed into him.

I turned to the three Yanks and said, “What’s y’all doin here?”

They looked at me for a long moment without uttering a word. I glared at each of them in turn with a look of downright hatred. Then I grinned maliciously and slowly pulled my colts from my belt. The Yank’s eyes widened. When I cocked the colts’ hammers, one of the men said, “We’re on a scouting mission.”

“Where’s your main force?” I demanded.

“Don’t know,” said another of the three.

“Guess! And it better be a good ‘un,” I threatened.

“They have probably cleared South Mountain by now,” offered another one of the three.

“How big is yar contingent?” I required.

“How many cannon?” I pressed.

The first trooper that had talked must have gotten his gumption back because he boasted, “We’re gonna catch you in a vice and squeeze you ‘til you yell ‘uncle,’ Reb.”

I walked up to him and put my face about two inches from his and hissed, “Don’t bet on it Yank.”

This made him back up. Whether it was my breath or the malevolent spirit behind my words, I don’t know, but he was assured of my determination.

The problem of what to do with three prisoners, while we conduct a scouting mission, suddenly loomed in my mind.