I took another long searching look at my Beloved and just sighted at the beauty of this lovely woman.  If I wanted to have a life with her, I had to find a way to thwart Mr. Newcomer’s plan of eradicating me by using his instrument of death, Ahab Duggan. Also, if feasible, I needed not to send Ahab to a well-deserved grave. He was an asset to the Newcomer family and probably the community of Harpers Ferry and its environs.  But how to accomplish these monumental tasks had me stumped.

I must have been thinking too much on resolutions to my problems because Daphne uttered, “Jim, are ya alright? You seem to be looking at me so strangely.”

I had been so wrought up in trying to design a plan that I must have had a bewildered look on my face.  I quickly refocused on Daphne and stammered, “I’m alright. I was just lost in thought.”

Daphne gave one of her raised eyebrow looks that denoted I had better watch my step or I would be summarily chastised. I grinned back at her, and she immediately changed to a narrow-eyed gaze that signified I was, at this moment, a scoundrel in her estimation.

I couldn’t help but chuckle, and the levity broke the ice. Daphne just shook her head and said, “What am I gonna do with ya?”

I retorted, “I have some ideas on that accord, but Uncle Jamison has disallowed any further displays of affection between us.”

I thought this would shock Daphne, but to my amazement she whispered, “What Uncle Jamison doesn’t know won’t hurt him.”

I recoiled in surprise and realized that Daphne had turned the tables on me when she laughed and pointed at my astonished expression.

I joined in the merriment with her.  We both collapsed in laughter while recalling the distressed look on Uncle Jamison’s face when he caught us in each other’s arms.

We finally were able to control ourselves until Uncle Jamison entered the room with that “holier than thou” look to see what all the amusement was about. Just seeing his expression caused another wave of hilarity on our part that embarrassed him and sent him from the room, shaking his head at the antics of our generation.

Daphne sat down in a chair next to my bed.  Suddenly, a handkerchief mysteriously appeared in her hand with which she dabbed at the tears of mirth streaming down her face.  I had to wipe tears from my cheeks also.

We slowly became coherent and Daphne offered, “Are ya hungry?”

I thought for a moment and then confessed, “I could take a morsel or two. Maybe eight or ten.”

Daphne giggled, and getting up, departed on her mission of food foraging.

I began to look at some facts that had been staring me in the face, but I was too addled to see them. 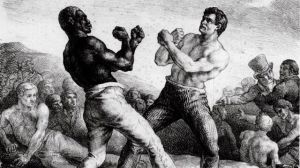 One; from the information I had gathered from Bessie, Ahab has been told to kill me. He could have killed me with my own pistols earlier, but he didn’t. It was probably because of Daphne’s presence, plus he considered it professional courtesy to let it be known he was gunning for me.

Two; he must perform his mission without Daphne knowing it was sanctioned by her father, or that Ahab was the instrument of her father’s will.

Three; to fulfill what I believed were the conditions of his assignment, Ahab would have to eliminate me from afar, or if he wanted to achieve his revenge while facing me, he would have to do it when Daphne wasn’t around and during the night.

So what were the solutions to this dilemma?

First, I needed to get out of Daphne’s presence. No matter how well Ahab tried to conduct my assassination, she could be collateral damage. Next, the safest place for me right now was with the cavalry. Then, I had to perform some exploit that would change Mr. Newcomer’s mind and allow me to live, plus allow Daphne and I to marry.  Finally, the last and the hardest, was to change Ahab’s mind which was set on revenge for breaking his wrist.

I was just starting to fashion some pretense for joining the cavalry when Daphne rushed into the room. Her face was ashen and she was wringing her hands.

She haltingly stated, “There’s a courier at the door. Mosby’s been shot and Colonel Daniels, the commander at Harpers Ferry wants ya to report to him immediately.”