Bessie looked away and brushed the tear from her cheek.

Daphne was still looking at me with a fond smile. I grinned back and asked, “Where are we?”

“Where do we go from here?” I questioned.

“We’ll go ‘cross tha Kearneysville Pike and keep going straight for a while. Then we’ll follow switchbacks until we hit tha Shepherdstown Pike. That’ll take us into Halltown,” he informed me.

“’Bout how long ya think ‘til we hit Halltown?” I quizzed.

“I see,” I acknowledged.

At that, Ahab flicked the horses’ reins, and we continue heading in a southeasterly direction.

I looked behind me, and Stonewall was munching on some grass along the roadside. He must have felt me looking at him because he raised his head and snorted. I smiled and turned around.

For a carriage laden to the gills with baggage, we had progressed rather rapidly. Borrowing any unforeseen calamities, I figured we would get to Halltown at 9:00 p.m. I really didn’t want to travel rural roads at night, but this time it couldn’t be helped.

Three hours later, the sun had just set as we pulled onto the Shepherdstown Pike and headed south. I pulled my watch out, and in the twilight, I could barely make out the dials on my pocket watch, which displayed 5:45p.m.

Ahab kept resting the team whenever he could, but you could tell they were tiring. His entreaties to keep moving were getting more vociferous.

A west wind began to rustle the night air, which brought action from Bessie and Daphne. They extracted blankets from the top of the baggage stacked beside Bessie. Daphne got two blankets to cover us, while Bessie laid a blanket across Ahab’s wide shoulders. Then she got a blanket for herself. I looked back to see if I could see Stonewall, but it was too dark to see if he was there. However, I did hear a snort letting me know he was following. As an added precaution I pulled one of my Colts from my belt and laid it beside my right thigh.

Finally the moon came out, which allowed Ahab to clearly see the road and not have to totally trust the horses’ to follow the pike.

We had proceeded about thirty minutes from intersecting the pike when we suddenly stopped. I heard Ahab ask, “What do ya want?”

Somebody answered him, but I couldn’t hear what was said. I came out from under the blankets and whispered, “You ladies. Get down in the floor.”

They quickly took a prone position in bottom of the carriage. I pulled both Colts from my belt, and keeping a low profile, I stepped in the spaces between the ladies as I began to exit the carriage on the left side. I let myself down gently from the vehicle to keep it from swaying. Next, I bent low as I inched toward the front of the carriage.

I was just in time to hear a man say, “We’re looking for somebody. Maybe ya can help us find him.”

“A Lieutenant Hager,” was the answer.

I continued forward until I was at the hind quarter of the last horse on the left nearest the carriage.  I took off my hat and rising just an inch at a time I finally was able to see two men on horseback in front of our team of horses.  They had pistols drawn and pointed at Ahab.

I think Ahab sensed my presence and he delayed his answer by mumbling in the most southern jargon, “Yowsir, he done died back in Martinsburg.”

The two men looked at each other, and I took the opportunity of cocking both Colts as I brought them up and fired them simultaneously. 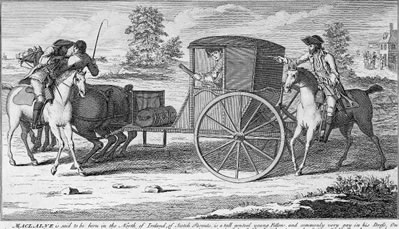 First, for some reason, our team of horses didn’t like the idea of being used as shields, plus being fired over in a gun fight. They bolted forward and rammed into the two highwaymen’s horses.

The second thing that occurred was, one of the men fell from his saddle into the road while his horse was forced to the left of the carriage and summarily rammed into a tree line bordering the pike.

The third thing that occurred was, Ahab exerted all his strength to get control of our team of horses. Through Herculean efforts, he got them stopped after they had traveled about twenty-five yards, but only after they had trampled the downed highwayman.

The fourth thing that happened was, the second highwaymen’s horse was forced to the right side of the carriage when our horses bolted. He fought to control his mount.

The fifth thing that happened was, I cocked my Colts and waited until the carriage had rumbled passed. Then I advanced toward the second highwayman alternatively firing my pistols. His horse began to buck, and he held on for dear life. I continued advancing and firing, but the rounds never found their mark, due to the panicked movement of the cayuse.

Suddenly, a shadowy shape came flying out of the darkness and rammed into the right side of the terrified animal. There was a loud crack, and both horse and rider were temporarily airborne.