Once mounted, Kirkland turned to me and said, “I guess I gotta new horse.”

I grinned at him and said, “No doubt, and ya definitely earned it.”

I thought for a moment and asked him, “Whatcha gonna call ‘im?”

He looked at me for a moment, as if he were lost in thought, and said, “I guess I’ll call ‘im, Rowdy ‘cause he’s so cantankerous.”

I chuckled and returned, “Sounds like a good name for ‘im.”

The Confederate guards were still cheering Sergeant Kirkland. I guessed that they would be embellishing Kirkland’s handling of Rowdy around the campfire tonight.

I raised my hand to bring their praise to a halt. They began to quiet down just as we heard a sound like thunder from the C&O Canal path. Momentarily, twenty troopers came riding into view with the sergeant, who had promised to gather a cavalry unit, in the lead.

The sergeant brought his contingent to a halt in front of me and saluted. I returned his salute.

I smiled and said, “Good job sergeant. Ya will be in command of tha troop. I will be tha overall commander and (inclining my head toward Kirkland) Sergeant Kirkland will be tha second in command.”

I continued, “Sergeant Williams, are ya familiar with tha area north of Shepherdstown?”

Before he could answer Sergeant Kirkland piped up, “I am, sah. I know tha area from here to Williamsport like tha back of my hand.”

I turned to Kirkland and said, “Major Murphy and I believe a Yank patrol is scouting north of Shepherdstown to find a way to attack tha town.”

“Do ya know where tha Yanks are now?” Kirkland asked.

“No, but I bet they’re close to tha northern part of tha town by now,” I replied.

“Well, they must’ve come down on Scrabble Road, which will feed into Shepherd Grade Road, north of town,” he speculated.

I thought for a moment and declared, “Then we’ll have to hold them up long enough for Major Murphy to hit ‘em in tha rear. Sergeant Kirkland, lead us to tha road that tha Yanks would probably take, if’n they was to proceed into Shepherdstown.”

“Yes, sah,” Kirkland returned and then shouted, “Follow me.”

Kirkland nudged his new cayuse, and the animal took off like a whirlwind. Not to be out done, Stonewall did the same. It was all I could do to stay in the saddle.  As Sergeant Kirkland directed his cayuse through the less traveled back streets of Shepherdstown, Rowdy and Stonewall competed for the lead of the pack. I had never seen Stonewall act the way he did. It seemed as if the two stallions were vying for the privilege of being the Alpha of the horses.

We left the twenty troopers in our dust as our chargers raced north toward the outskirts of town.

Once we began to see just a few scattered homes and a lot of fields, Sergeant Kirkland brought Rowdy to a lope, then a trot, and finally, a walk. Stonewall matched Rowdy’s gait step for step.

We proceeded at this pace for a few minutes. Kirkland kept looking over his shoulder for the rest of our party to catch up.  After a few minutes the twenty troopers came into view and quickly joined up with us.

When the troopers were again aligned in a column of twos, Kirkland looked back at the pack and put his forefinger to his lips. The silent order was handed down the line for everyone to be quiet.

We proceeded in this discreet manner for about one hundred yards. This allowed the horses to get their breath back plus Kirkland seemed to be constantly turning his head from side to side, as if he was trying to hear a specific sound.

We continued for about another 150 yards when, suddenly, Kirkland stopped and turned to me. He gave me a ‘come hither’ movement of his hand. So, I maneuvered Stonewall close to him and leaned so we could whisper to each other.

“The Yanks are up ahead. They’ve probably split up and are traveling parallel roads that head toward tha Potomac River. Although both roads dead-end before they reach tha river, I believe they’re trying to find a suitable place to land troops from troop barges coming down tha Potomac River,” whispered Kirkland. 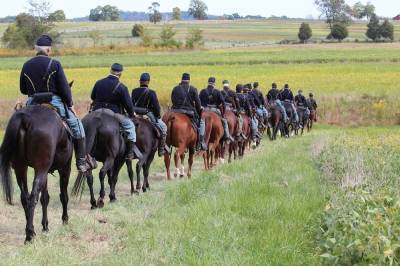 I looked at him for a long moment and returned in a low voice, “How’d ya come to that conclusion?

He shrugged and whispered, “It’d be what I’d do, if’n I wanted to attack Shepherdstown from tha north.”

I gazed at him for another long moment and then asked, “How do ya know they’re up ahead?”

I gave him a perplexed expression and then shook my head that I couldn’t.

He nodded and whispered, “Believe me Captain. They’re up there.”

I looked at him for a long time. I took in every body, facial and eye nuisance that he emitted. Finally, I said, “How close are tha two roads to each other?”

“About one hundred yards, when they branch off the road we are on, but the distance between ‘em widens out tha closer they get to tha Potomac,” he whispered.

“Take us to the southernmost road that they are on,” I commanded.

Kirkland smiled at me, and turning back to the troops, motioned for them to follow him.